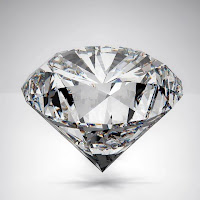 I had a dream recently in which I heard someone say, "That's a Job diamond," or "That's a real Job diamond!" I had never heard this expression before, but I understood what it meant after considering it.

You know the true story of Job, who was a man who lived a blameless life before God, yet satan attacked him and made him suffer great loss. Job suffered the loss of his children and his own health. Many calamities befell this godly man who had once been very wealthy, and he became so afflicted that he wished he had never been born. The very thing he feared came upon him, and what he dreaded happened to him. Even his own wife advised him to curse God and die.

However, in all of this, Job did not sin in what he said. He didn't charge God with wrongdoing, but kept his faith in God. In the end, God healed Job and made him prosperous again and gave him twice as much as he had before. Here is the account of his restoration in Scripture:

"After Job had prayed for his friends, the LORD restored his fortunes and gave him twice as much as he had before. All his brothers and sisters and everyone who had known him before came and ate with him in his house. They comforted and consoled him over all the trouble the LORD had brought on him, and each one gave him a piece of silver and a gold ring. The LORD blessed the latter part of Job's life more than the former part. He had fourteen thousand sheep, six thousand camels, a thousand yoke of oxen and a thousand donkeys. And he also had seven sons and three daughters. The first daughter he named Jemimah, the second Keziah and the third Keren-Happuch. Nowhere in all the land were there found women as beautiful as Job's daughters, and their father granted them an inheritance along with their brothers. After this, Job lived a hundred and forty years; he saw his children and their children to the fourth generation. And so Job died, an old man and full of years." (Job 42:10-17)

I have had my own Job experiences. I have been through a tragic loss that made me cry pools of tears, and experienced fiery trials during times of desperate hardship that tested my faith. But the Lord brought me through it all, for which I give Him all the glory, honor, and praise.

Fiery trials are allowed by the providence of God for the purifying and perfecting of His people. As Job said during his trial, "But He [the Lord] knows the way that I take; when He has tested me, I will come forth as gold." (Job 23:10). We see this same truth all throughout Scripture.

In Proverbs, it says: "Blows and wounds scrub away evil, and beatings purge the inmost being." (Pro 20:30)

In Daniel, it says regarding the saints during the end times: "Those who are wise will instruct many, though for a time they will fall by the sword or be burned or captured or plundered. When they fall, they will receive a little help, and many who are not sincere will join them. Some of the wise will stumble, so that they may be refined, purified and made spotless until the time of the end, for it will still come at the appointed time." (Dan 11:33-35)

James wrote: "Blessed is the one who perseveres under trial because, having stood the test, that person will receive the crown of life that the Lord has promised to those who love him." (Jas 1:12). James even referred to Job saying, "Brothers and sisters, as an example of patience in the face of suffering, take the prophets who spoke in the name of the Lord. As you know, we count as blessed those who have persevered. You have heard of Job's perseverance and have seen what the Lord finally brought about. The Lord is full of compassion and mercy." (Jas 5:10-11)

The apostle Peter taught about the value of trials when he wrote: "In all this you greatly rejoice, though now for a little while you may have had to suffer grief in all kinds of trials. These have come so that the proven genuineness of your faith—of greater worth than gold, which perishes even though refined by fire—may result in praise, glory and honor when Jesus Christ is revealed." (1Pe 1:6-7)

Peter also taught that suffering in the body helps set us free from sin, when he wrote: "Therefore, since Christ suffered in his body, arm yourselves also with the same attitude, because whoever suffers in the body is done with sin." (1Pe 4:1)

He said that such suffering would bring glory to God through our lives: "Dear friends, do not be surprised at the fiery ordeal that has come on you to test you, as though something strange were happening to you. But rejoice inasmuch as you participate in the sufferings of Christ, so that you may be overjoyed when his glory is revealed." (1Pe 4:12-13)

Putting it All Together
So what then is a Job diamond? Well, diamonds are formed under enormous pressure, and as we can see from Scripture, there are many ways the Lord brings forth diamonds through the "Job experiences" we each go through in life. In the case of Job, the Lord restored his fortunes and gave him twice as much as he had before. So there were the natural blessings. But he personally was a better man as well, because his character was purified, and he came forth as gold. The Lord allows these things to refine his saints, purify us, and make us spotless. It serves to prove our faith to be genuine, which will result in praise, glory, and honor when Jesus Christ is revealed. Those who participate in the sufferings of Christ and endure to the end will be overjoyed when His glory is revealed. Those are the Job diamonds the Lord desires to produce in our lives.

If you enjoyed this post, you may also like the other posts in this blog available through the links on the Home page. You may also access my blog directory at "Writing for the Master."

Do You Want to Know Him?
If you want to know Jesus personally, you can. It all begins when you repent and believe in Jesus.  Do you know what God's Word, the Bible says?

Please see my explanation of this in my post called "Do You Want to Know Jesus?"

Len Lacroix is the founder of Doulos Missions International.  He was based in Eastern Europe for four years, making disciples, as well as helping leaders to be more effective at making disciples who multiply, developing leaders who multiply, with the ultimate goal of planting churches that multiply. His ministry is now based in the United States with the same goal of helping fulfill the Great Commission. www.dmiworld.org.